So this weekend Duncan and myself played the board game Evolution The Beginning. It is 2-6 players and was a relatively quick game, especially sense it was just the two of us. The point of the game is to create species and to “evolve” them by adding special traits so you can eat more food than the other players. The player with the most food and cards at the end of the game is the winner. 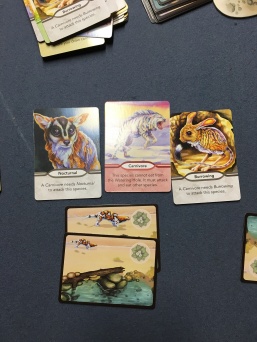 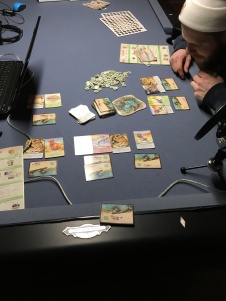 . That is one of the things I like the most about the game. There isn’t really a whole lot of set up for the game but when we were starting it took us a little while to get the hang of it, it doesn’t help that we were a little inebriated.

The picture on the right shows the main set up of the whole game. The spot in the middle is the watering hole were you put some food tokens at the begging of your turn. The big pile of food tokens is the excess food pile and you can get special traits that allow your species to eat straight from the excess pile. Then you also have the draw pile, once you run out of cards to draw the game is over.

Over all if you like strategic card games you would like this game. There are many traits like carnivore, long neck, and scavenger. They have a few add on’s as well that would add a lot more excitement to the game.

Three bros just chilling, talking about movies, games and anything that we enjoy View all posts by TheBlamBros

Are you tired of a rotten fruit telling you what to think about movies? Well so are we. Dominick, Duncan, and Griffin Spencer sit down and talk everything movies, TV shows, and video games. Each episode we discuss movies new and old and give 'em a rating.